During this special four-day Bank Holiday weekend in the UK, most citizens celebrated Queen Elizabeth II’s Platinum Jubilee with great gusto. 70 years on the throne makes Queen Elizabeth the longest serving monarch ever. Parties were held around the world, especially in the 54 Commonwealth countries that Queen Elizabeth has been Head of since 1953.

The Queen ascended to the throne in 1952 at just 25 years old. This week on her official 86th birthday she is as popular as ever. The whole country has thanked her for her dedication and focus to the people of the UK and also internationally, that she represents.

The largest events to mark the occasion were held at Buckingham Palace overlooking the Mall which was filled with thousands of royal fans. Over the weekend there were several parades and musical extravaganzas. These ranged from the horses and military splendour of the traditional Trooping of the Colour held every year on the Queen’s official birthday, to the latest DJ’s and rappers performing their unique tributes on an amazing projector lit stage.

The wonderful Platinum Party at the Palace showcased the creativity and talent of British music, art, fashion through the decades as well as some impressive event management. In addition, the joy of inviting some international stars which included Diana Ross to the party ensure it was a rocking success with something for all ages. The Queen and her close family appeared on Buckingham Palace’s royal balcony several times to the delight of the crowds below.

Although the major processions were initially formally organised back in the Autumn of 2021, public organisations and businesses everywhere in England, Wales, Scotland and Northern Ireland began to decorate and prepare for this memorable weekend during May 2022. By the time June began the Union Jack bunting was everywhere.

In Sussex children played and had their face painted at fairs and fetes like the Fun Day at priory Park in Chichester in honour of the Queen’s Platinum Jubilee. Small independent retailers and big chain stores all took up the theme and used their window displays to thank the Queen for her service in hundreds of creative ways. There were mannequins dressed like the Queen and lots of vintage inspired collections. Corgis were particularly featured as the Queen’s favoured breed made for fun promotions.

Merchandise in red, white and blue that is suitable for attending the formal and local events were all highlighted and fashionably presented. Food stores encouraged the stocking up of delicious supplies of grand groceries for entertaining family and visitors. Even the post boxes have been decorated with the latest in royally inspired ‘yarn bombing’.

In nearly every village, town and city across the land Street parties were held to toast the popular Queen’s extensive reign. In Sussex the campaign chairs, tablecloths and colourful flags were prepared ready for an afternoon on Sunday of toasting the Queen in Jubilee outfits and hats. A variety of ‘afternoon tea’ inspired foods and drinks and some favourite international cuisine dishes graced the decorated outdoor banquets.

After the doom and gloom of Covid related restrictions most residents are keen to make the most of mixing once again. The weather was kind in Sussex and everyone enjoyed getting together with friends and neighbours to celebrate the Queen’s incredible dedication to the country with a good old-fashioned summer ‘knees up’. The weekend was declared a resounding success and a good time was had by all.

How Are Shops Keeping You Healthy and Safely Distanced? 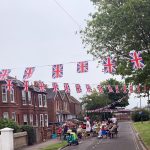 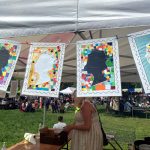